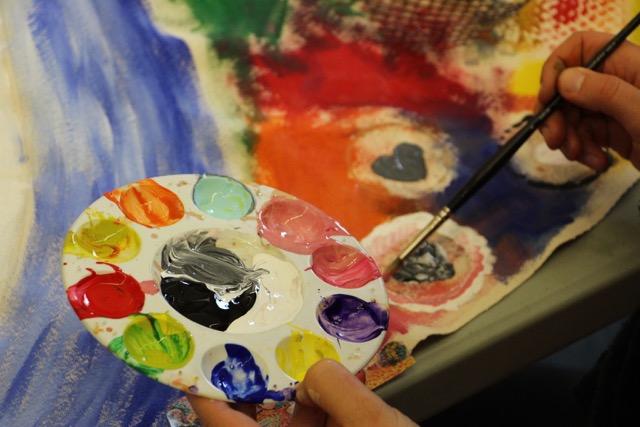 When I enter Gretchen Ladd’s bright home studio on a beautiful Kitsilano street adorned with delicately branched trees fringing near the ends, I’m immediately consoled by the serenity and the openness of the space. It’s a pleasing combination of homey and lofty: a few of the walls are plywood, splattered in paint, while art materials are stacked neatly on a shelf against another wall. But the studio’s loftiness is contrasted by its plush loveseats, and framed photos lined up on the mantel. I noticed a handmade doll, presumably a completed art project by one of her clients, lovingly rest against one of the photos.

Of course, what makes this space radiate with an airy coziness is Gretchen herself. Gretchen is a registered art therapist, clinical counsellor, and an artist. She runs her private practice from this picturesque home studio, on top of working with the Callanish Society with individuals living with cancer and being an instructor at the Vancouver Art Therapy Institute. She speaks with a soft-spoken, yet strikingly eloquent voice — a quality that, I presume, is essential to being an effective therapist. It takes all of my willpower to not give into her empathetic energy and spill out my entire life story.

I first met Gretchen in a Vancouver Arts Colloquium Society’s Weaving session at Dunbar Centre, a few weeks prior to my interview with Gretchen. Coincidentally, when I ask Gretchen where she currently finds her inspiration, she replies that it is in this warm community of the Weaving group. “‘What’s happening here in this group of women?’” she wonders aloud about the group. “I see the stories coming out. Probably because of the way that they’re together, and not just what they’re working on. It’s the conversations, the support, or the challenges. It’s a pretty neat group.” I can attest to this: the Weaving sessions are spaces that are not only rich with creativity, but in its community as well. It is an intensely cooperative experience, as veteran weavers of the workshop guide the newer weavers in the warping process, and through the twill and twine.

Her interest in art in relation to community stretches back to her days as a teenager volunteering with a group called Blooming Humans, where she worked with people who had been hospitalized in psychiatric institutions on projects like collaging and performing as a way of forming a community. “It was so fun, so wild,” she recalls. “So full of unknowns and full of precious moments. That got me interested in art as a form of healing, community, and social connection.”

She then briefly veered off from the arts route, completing her BA in Psychology, but returned to her artistic course in 2001, when she was admitted to Emily Carr to study Community Art. “I always felt like art served a purpose, more than my own ego, or my ideas, actually,” she says. “It’s served a larger purpose about connection.” She then went on to work on a project at St. Paul’s Hospital, working with people in Palliative Care. “I really felt like the arts had a place in in both healthcare and community,” she says of the project.

This realization led Gretchen to her current occupation, as she ended up doing her Art Therapy degree shortly after Emily Carr. Through her studies, she realized that the practice of arts and healing had a name (Art Therapy), and had been taking place over many centuries. She worked with the cancer community for about 15 years, with individuals battling the transitions with cancer and their families. She helped those nearing the end of life regain their voice, a quality that illnesses tend to suppress. Gretchen aided them in overcoming their feelings of invisibility and voicelessness through the creation of their legacy work, a final art piece for their loved ones to be remembered by. “All of that learning over those years gave me a strong sense of how art can create sense within ourselves, and within each other,” she reveals. “Something about being witnessed, cared for, and being seen — being visible is really important.”

I was curious to know if the people she works with in her art therapy practice had a structured plan in mind. Artists in the studio can often work with influences that had been gradually ripening in their minds, and manifest physically once the paint brush meets the canvas. I asked Gretchen if the art produced from art therapy is distinctive from studio art, or the kind you find in galleries. Does it lean towards the abstract expressionist aesthetic? Is it always spontaneous?

“Well, sometimes they do have a structured plan, but it falls apart,” she says. “The question around that is, ‘What material would feel good in your hands?’ What you’re doing is being mindful and aware of their impulses and their feelings to create the work. It arises out of those feelings, those felt senses in the body. So when they come in with a plan, it falls apart because they’re in a totally different place by the time they get there. In art therapy, the idea is that the art emerges from an experience within yourself. What’s happening in the moment, the past, the future. Everything that’s emerged are things that have never been seen before. In the art world, there’s often structures or templates for work. But because this isn’t for a consumer or a buyer, it’s kind of raw, very basic. I think that because there isn’t that concern for it being ‘good art,’ technique doesn’t matter.”

For Gretchen, this is precisely the advantage of having art in the context of therapeutic practice. While she advocates the standard of verbal therapy, she also acknowledges that talk therapy tends to be more cognitive-based, whereas art therapy utilizes our body, our senses, and the felt sense of things that are difficult to squeeze into words. “While language is so powerful, helping us make meaning and sense of things, it doesn’t help us in those places that are outside of language,” she says. “In the trauma field, it’s been shown that [art] can help people deal with overwhelming feelings; memories that are connected to a different space. It’s a kind of language that allows different things to happen.”

Generally, though, Gretchen follows the client, unless “they’re beating themselves up during the process” — which is when she steps in. Because art can bring up a lot of fear, judgment, and self-critiques, compassion is vital in exposing the inner critic. “It’s a scary part of ourselves, so we work with it. Get to know your critic. There’s enough safety, enough room for all of us, which I think is very liberating and beautiful.”

This inner critic that she mentions is an antagonistic figure that creative processes are all too familiar with. With artists and writers, this inner critic can often take them to creative blocks, immobilizing the creative flow, I asked Gretchen if creative blocks are still a prevailing phenomenon in art therapy for her clients, many of whom occupy positions of work in very different fields and do not consider themselves as artists. Is the creative block something that hinders us in our everyday moments, be it individually, in a group, or one-on-one art therapy?

“I think in art therapy, a creative block is a place of curiosity. There’s no expectation; we’re in a creative flow but the focus is not on the art per se, but more for people to connect with themselves, and what’s happening. My very simple and quite common structure for art therapy is about connection with yourself, and connection with what’s happening, connection with others, compassion, and letting creativity help support those two qualities; and healing and change.” She continued that when people are creatively blocked, she gets them to work with it, prompting them with questions like, “What’s that wall like? Is it this big, or this big? What if we construct it with some cardboard, and work around it?” 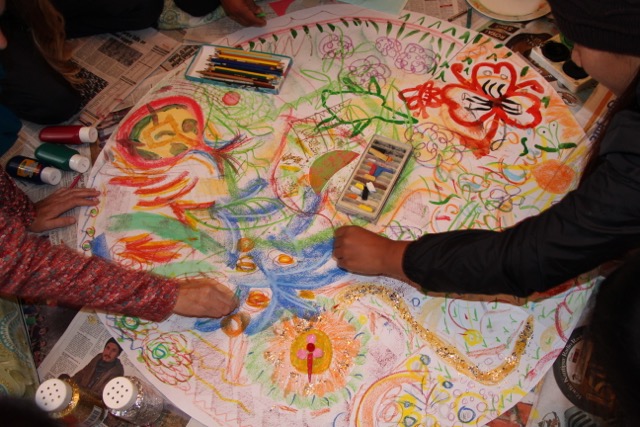 Much like everything else with nuance and individuality, there isn’t a straight, paved road cutting through the creative block. Think of it like this: rather than a highway built on land cleared of its natural greenery, navigation around a creative block is analogous to a maze or a labyrinth, whose very foundation works with the greenery. You confront a towering wall in every corner you turn, yet it is the walls themselves that form the very path to your destination.

“I think that there’s more energy and power in some way when we have fear or resistance,” she says, “So the idea is to get really close and ask, What do you have to tell/teach me? It’s still an experience to check out. There’s no problem with the creative blocks. We use the block. You make the block. You touch it. And oftentimes you really come into connection with it, something else appears: behind it, in front of it. It’s kind of like the breath, it comes and goes. Blocks are kind of fun.”

It was interesting to learn that the plight of the creative block was a universal one. Throughout my interview with Gretchen, I came to realize that people have more in common than I had thought, stretching beyond the creative block. This aspect of universality in human creativity resurfaced when I asked her about her work in Nepal, Japan, and Thailand, where she conducted art therapy workshops and classes.

I asked her if each country had a recurring theme or style that distinguished itself, whether it was religious symbols, colour choices, or cultural patterns. She pondered for a while before answering, “I don’t know about that. One thing I noticed about Thailand is that there’s something about fine detail, and there’s an aesthetic in Thai art that has to do with patterns, and details, and colour. I saw that a lot in the group of students I worked with. In Nepal, colour. There’s an expression, rungi-chungi, which means ‘colourful’. There’s a celebration; an appreciation of colour.” She commented that she also noticed a commonality in the Weaving group with the detailed intensity of information finely woven into the pieces. 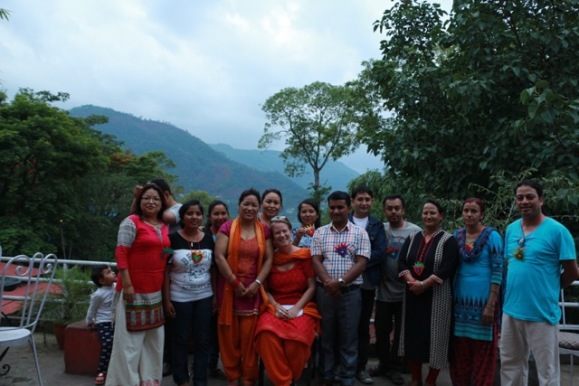 But despite these small variations in the aesthetic, Gretchen concluded that all of the countries that she’s worked with are really no different when it comes to the basis of art creation. “What’s funny is that there’s always something that feels the same, while doing art therapy in any country,” she remarks. “There’s this fundamental human creative process. I feel like I can be anywhere. There’s this vitality, or life force that comes out. Something about the capacity to engage the world and transform something. It’s this basic essential energy and excitement in creating. It can be in food, or in gardening — so that’s one thing that’s similar. Whether the dish or the dress might look different, once we get into pain, we’re just humans getting into pain. There’s this essential quality that comes out. And in art therapy, it’s the quality of heart, this connection to one’s own essential self.”

This basic human vitality, and the fundamentals of the human creative process is something that is present in every community Gretchen is involved with. From the stories and conversations of the Weaving group, to the diversity of the creative blocks of her clients, all the way to the farthest corners of Nepal, Thailand, and Japan — what holds us all together is the all-embracing vigor that arises when it comes to self-expression, and creating human connections. It’s no wonder why Gretchen is attracted to these spaces of creative communities; there’s no better place to witness such a beautiful and universal occurrence unfold.