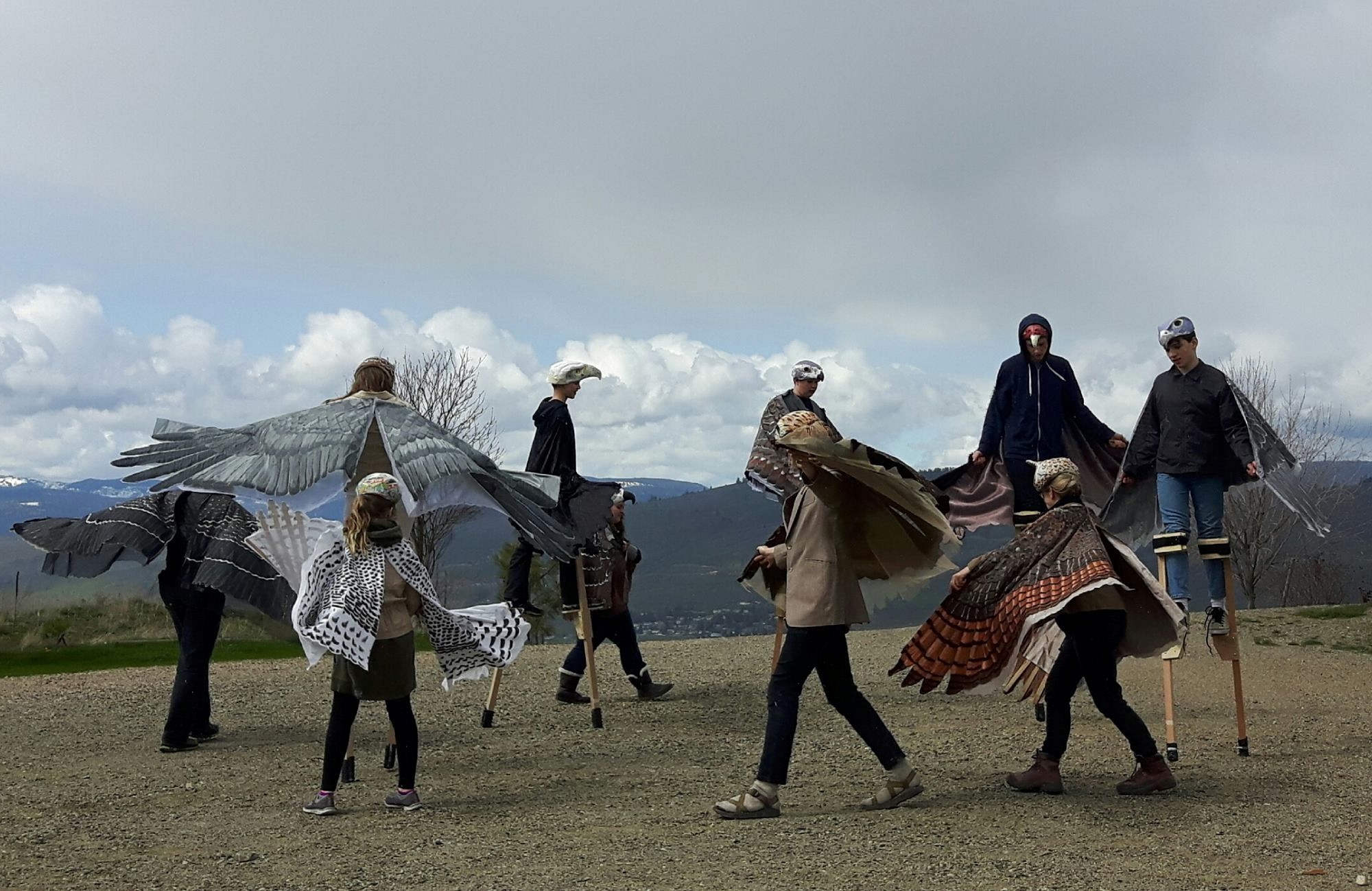 There are precious few remedies for the bleak mood of Vancouver in January, but I can say with certainty that a visit with artists Paula Jardine, Carmen Rosen and Cathy Stubigton is a sure-fire cure. Our meeting takes place on one of those grey winter afternoons that us locals know all too well, when it appears that someone has punched a hole in the sky and all the color has drained out of our city, only to be replaced with relentless drizzle. I hear Paula, Carmen and Cathy before I see them—their voices and laughter pierce the sleepy air, announcing their approach. The three women enter in a flurry of bright woollen hats, scarves and coats, chattering cheerfully as they shed this winter plumage. Greetings are exchanged, hands are shaken and we soon all settle at a tea and cookie-laden table. I quickly note that any question posed to the trio is met with a chorus of inter-weaving, over-lapping answers—and yet they are all remarkably, genuinely interested and engaged with each others’ comments and opinions. This is perhaps a side effect of the emphasis on being present, and re-connecting with one’s environment and fellow humans, that seems to be a unifying theme for all three artists’ work. We briefly discuss some of their past residencies—in this city as well as out of town—and the art they’ve created. Carmen, for example, cloned spores from local oyster mushrooms and incorporated them into deadwood sculptures to create environmentally sustainable art that would decompose over the years. Cathy and Paula use the term “guerrilla acts of creativity” to describe much of their work—that is to say, spontaneous instance of art that are intended to make you “look at where you live everyday in a different way”. Paula’s Public Dreams performances in the past re-envisioned Vancouver’s relationship with culture, language and death, while Cathy’s workshops in rural British Columbia encouraged participants to view themselves as everything from particles in a digestive tract to raptors and sparrows.

It’s difficult not to get side-tracked by the women’s illustrious careers and the fascinating work they’ve done in the past, but I’m meant to be interviewing them today about their latest project: ‘Birds on Parade!’, a performance piece that’s part of the Vancouver International Bird Festival. This year our city has the honour of hosting the 27th International Ornithological Congress, the world’s longest established and most prestigious meeting for bird scientists. Since its founding in Vienna in 1884, the Congress has taken place every four years, and this year it is being held at the Vancouver Convention Centre. To celebrate the occasion the city has planned a Bird Festival that will take place in the summer, which will be composed of a variety of educational and artistic events, such as the parade. Leading up to the festival in August, Paula, Cathy and Carmen will be hosting a myriad of workshops that will be open to the public, where anyone can learn how to make bird masks, puppets, or even walk on stilts. (The trio assures me with a laugh that the latter daunting activity is much easier than it sounds.) The series of workshops will culminate in a fantastical parade: on August 20th the artists will be transforming the Sea Wall that us Vancouverites have grown so accustomed to, into an ecstasy of feathers and song with their procession of costumed revellers, puppeteers and violin-players. Cathy even mentions the possibility of the celebration crossing the land-sea boundary; the parade may be accompanied by kayaks done up in papier-mâché to resemble giant waterfowl. (And of all the things to spill over into our oceans, art would certainly be the best.) The bird parade will travel down the Wall until it reaches Jack Poole Plaza, which is beside the Convention Center where the Congress is being held. There will also be stationary musical performances situated along the procession route, and the audiences that gather to watch will be able to jump in and join the parade as it passes—all are welcome in this flock, regardless of age or experience level. Extra masks and puppets will be brought along for the impromptu additions to the group.

Though I wouldn’t have guessed from their delightful dynamic, this is the first time that Paula, Carmen and Cathy have worked together on a project. The fourth collaborator on the project is Mark Haney, a local musician who will be composing pieces for the violin modelled after birdsong. Paula cites the international musical tradition of recreating birdcalls with the violin as inspiration for this—the practice has roots all across Europe she says, using Hungary as a specific example. When I ask what helped them to arrive at the concept of the project, Paula replies with a smile “All three of us have a bit of a parading inclination.” Cathy’s past work with stilts and birds was another inspiration.

The artists also explain that a large part of this project, as with many of their previous ones, is relieving the social isolation that they see as one of our city’s biggest problems—united by the creative process, groups of friends will form in the workshops and stilt groups, and these lasting bonds are art in themselves. And though the workshops haven’t begun yet, there is already evidence of the parade beginning to bring people together: troupes from all over Canada have made their interest in the celebration known, and violinists and performers will be migrating here from Victoria, the Interior, Toronto and even the Northwest Territories. Cathy voices the women’s belief that art lies not just in the final product but in the journey of its creation, saying “Each workshop, and each rehearsal, is eventful in itself.” Carmen adds with a twinkle in her eye that their other goal is to make sure that “the whole city is crazy about birds by the time the Congress happens.”

Like all good things must, my conversation with these three lovely ladies eventually draws to a close, two hours and many cups of tea later. We start the process of packing up and saying our goodbyes, as we bundle ourselves in winter-wear again. I pop my headphones in and set off into the rain, but a few minutes later, I feel as whiff of air as a car passes me—Cathy, Carmen and Paula’s car, I soon realize. Their arms are stuck out the window, waving enthusiastically, bright scarves flapping in the wind. I hurriedly wave back, and remove an ear bud to catch a retreating chorus of friendly farewells. They leave in their wake a smile and a buoyant mood, which I’m beginning to suspect will be the overwhelming effect of their parade on the city. Birds on Parade! is an amazing opportunity to participate in what will, without a doubt, be a spectacular work of performance art. It also offers the chance to connect with new people, learn new skills, get educated about local wildlife and re-discover our beautiful city. If you are interested in becoming a part of the parade or getting involved in any of Paula, Carmen and Cathy’s mask-making and stilt-walking workshops you can check out www.vanbirdfest.com to learn more, as well as find out about other avian adventures.

The Vancouver International Bird Festival will take place in August, 2018.

3 thoughts on “Birds of a Feather: A Conversation with Three Artists”