On April 12th, the Sikh Temple Sukh Sagar opened its doors to the public for a special event entitled “Gurdwara Tour – A History Forgotten.” This statement in itself is somewhat inaccurate, as the doors of the gurdwara (temple) are always open to anyone in need of a spiritual sanctuary, or even just a good meal. This event, however, was designed specifically for those interested in learning about Sikh heritage and beliefs, hosted by Sikh Heritage Month BC.

Despite the fact that the event had been free and open to all, it was slightly daunting for me to walk into the gurdwara with no connections to anyone and little assurance that I covered my hair properly, despite my eagerness to take in everything. My worries soon proved to be needless, as I was greeted by several volunteers who gladly guided me around the gurdwara before the event officially commenced.

I had the privilege to talk to Simer Singh – a Sikh meditation teacher who came from Chicago to lead meditation workshops in Vancouver – who gave me a wonderful introduction to the spiritual path of a Sikh. To all my questions, Simer gave cordial and well-articulated responses. “Meditation starts with chanting,” he explained. Through chanting mantras, a Sikh’s mind begins to merge with the sound, eventually becoming connected to the voice of God. Regarding Sikh identity, Simer emphasized that Sikhi as a spiritual path and Punjabi as a culture are distinct ideas, despite the fact that they often come hand-in-hand. “Anyone who wants to meet God is called a Sikh,” Simer said. On top of this, God has no definitive form, which prevents a Sikh from discriminating against any particular race or gender. “Economic, cultural, and educational circumstances all shape a Sikh,” Simer said after some thinking. He added that Sikh communities can differ vastly even between two points in the same geographical region, such as Abbotsford and Surrey. Some communities may focus on singing, while others prioritize the internal journey over rituals. Above individual choices of practice, it is the maintaining of a strict and sacred relationship between Sikh and God that is of the utmost importance. When I asked about why he chose the path of a meditation teacher, Simer’s slightly surprised expression revealed that the decision never came with much doubt for him. His experiences of connecting with God taught him that as humans, “we all have the opportunity to change the way we think,” lest we waste our lifetimes in oblivion and needless suffering.

After the insightful interview with Simer, one of the organizers of the event – Sukhvinder Kaur – made herself available to chat with me as well. Like Simer, Sukhvinder was friendly and well-spoken. Besides that, she carried an aura that made me feel immediately welcomed. Before we started on any topic, Sukhvinder already invited me to a popcorn-making event as a part of the preparations for the annual Vaisakhi Parade. When I asked her about what her roles are, Sukhvinder said merrily that she “wears many turbans.” She is both a part of the World Sikh Organization of Canada, which promotes and protects Sikh interests, and the Multifaith Action Society, a locally based organization that advocates interreligious understanding and cooperation. Echoing what Simer said earlier, Sukhvinder stressed that “the size of your heart is more important than the size of your turban.” The choice of whether to wear one rests with the individual’s level of comfort, but to Sukhvinder, the wearing of a turban is the carrying of a crown that reminds her of her rights to her own sovereignty, among other things. “It’s love; it’s the freedom to be whoever we need to be,” Sukhvinder said. “The turban is a physical reminder that gives us strength and courage, and reminds us of our responsibilities. It gives us joyous resilience.” On the topic of carrying on tradition, Sukhvinder added that she believed bilingualism was important. Knowledge of Punjabi helps the younger generation access scriptures on their own, because there are always things that get lost during translation. Currently, the gurdwara offers Punjabi language classes to empower young Sikhs, although there are also lectures in English for those without any understanding of Punjabi to learn about Sikhi as well.

Just as I was about to conclude our pleasant talk, Sukhvinder raised the issue of stereotypes associated with the Sikh community – a topic that I had overlooked. Sukhvinder drew attention to how Sikhi is a way of living that emphasizes equality and standing up for one’s neighbours. She raised the example that Sikh women in India had in fact been literate, political, and active in the military long before the British rule; colonialism had been far more devastating to the progress of feminism that traditional beliefs ever were. According to Sukhvinder, Sikhs today still have the inclination to unite to fight for women’s rights, indigenous rights, and LGBTQ rights. In an age of social media, she hopes that people would “be curious about their neighbours and reach out to fact check.” These neighbours can be Sikhs, Muslims, indigenous peoples, or anyone at all. It is the hunger for different perspectives that enables us to build a stronger community.

Before we moved on, Sukhvinder told me more about the concept of langar – a free meal for all to enjoy. The langar hall in the gurdwara is open to the public at all hours while the gurdwara is open – a benefit for homeless people in the community. I had a taste of the langar myself. It was a humble vegetarian meal that was both flavourful and filling, and second helpings were generously offered. For the full experience, I would have crossed my legs and sat on the carpet with my tray on the floor, but with a laptop and other personal belongings to tend to, I sat at a table instead.

I tried my best to copy the table manners of an elderly man across from me, but I failed miserably at getting enough daal on my roti without smudging it all over my fingers. It made me wonder if people who didn’t grow up using chopsticks feel the same way when going to a sushi restaurant. Upon putting my tray and cup away and thanking one of the dishwashing volunteers, I was mildly surprised when he responded with a “xie xie” (thank you in Mandarin). “You’re welcome,” I answered in Mandarin and prepared to walk away, but was stopped mid-step when the turbaned man called out “to-siā” to me in what I understood to be the Taiwanese/Min dialect. The man started explaining in the same tongue that he came from Malaysia, and that there are many Indian Sikhs there who learn to be multilingual. Hearing such a familiar tongue spoken in an utterly different accent by an Indian man gave me quite the shock, and I was reminded of Simer’s words that Sikh communities exist over the world, in various forms but with a unifying ideology.

One floor above the langar hall is the diwan hall, where the holy scripture Guru Granth Sahib Ji (GGS) is kept and where worship takes place. After catching the second half of Simer’s talk on Sikh heritage, I had the opportunity to participate in Sikh meditation and observe the sukhasan – the ceremony that accompanies the “retiring” of the holy scripture into a special room at the end of the day. The meditation tutorial had us chant the mantra “Waheguru,” although Simer also mentioned that any phrase one resonates with can be used during this meditation. Within a short period of time, the volume of our chanting was adjusted from normal to whispery to silent. In the end, it was in the mind that the syllables still resounded at a soothing and enigmatic tempo. 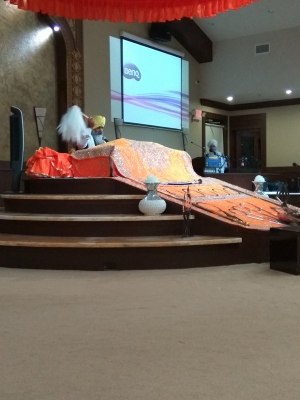 Visitors were permitted to leave anytime they liked during the sukhasan ceremony, but I was determined to stay for the full length. As someone sung an impressively long hymn from memory, I bowed down with everyone else and allowed my forehead to touch the floor. The experience was oddly reminiscent of my memories of attending Buddhist ceremonies at a temple in Richmond with my parents. Near the end, a man began distributing portions of some food in a large bowl to outstretched hands as he wove his way through the audience. Sukhvinder leaned over and rapidly whispered to me the contents of the food known as karah prashad – a type of semolina halva that signifies an acceptance of holy blessings when received. We had the option to turn it down, but the open and solemn atmosphere touched me, so I received my portion with gratitude. The warm, buttery wholesomeness slid smoothly down my throat.

At the end of the night, a woman by the name of Raveena graciously offered me a ride not just to a bus stop, but all the way to my home in Surrey. “I’m not going to kidnap you,” she joked, and although I have never spoken to her before or even during the event, the atmosphere of the night cultivated a sense of automatic friendship and trust. During the ride, Raveena talked about her commitment to the spiritual path and the necessity of living with love and open-mindedness. “My daughter never listens when I say all this to her, but you can be my daughter for now,” she laughed.

Raveena commended me for walking into unfamiliar spaces to learn about new things, but in truth, it had taken me long enough before mustering the courage and interest to visit a gurdwara, despite having lived five minutes from one for almost a decade. It is thanks to Sikh Heritage Month BC that I had the enlightening experience that night. As Raveena and Sukhvinder both touched on, curiosity towards one’s neighbours enlightens both the individual and society, and the gurdwara is an excellent place for a curious being with its harmonious, restorative atmosphere and the warm community it shelters.