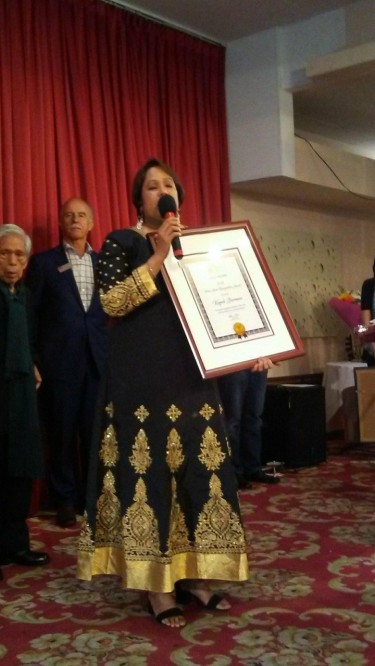 Koyali Burman, a Vancouver-based Economic Development Strategist, was the recent recipient of the Pan Asian Recognition Award – a prestigious award given to individuals who have made remarkable achievements or contributions on behalf of the Pan Asian community. For Koyali, it is another feather in her cap of impressive accomplishments in the arts and culture scene locally and internationally.

One warm summer morning, I had the pleasure of sitting down with Koyali Burman and her colleague Yoko Tomita, to discuss their efforts in supporting local art and culture.

Koyali’s deep-seated connection with the arts is also connected to her involvement with non-profit organizations, financial institutions and businesses on strategies to improve economic opportunities for professional local artists in the Renfrew-Collingwood area, as well as increase capacity for market access and expansion of cultural products.

Working alongside community members and professionals, Koyali is helping to develop an Arts and Culture Council in the Renfrew-Collingwood area, which is meant to act as a hub for emerging and established artists, as well as enhance arts and culture initiatives in Vancouver. According to Yoko, a great supporter of art and culture in the Renfrew-Collingwood area who is also working to develop the Arts and Culture Council, the creation of this space is also in response to the lack of any arts facilities in and around the area. “Our aim is creating a more community-development based arts hub,” Yoko mentioned. The space will likely be used for performances, classes and even perhaps mentoring in the arts.

Koyali’s dedication to the arts extends to her childhood, when she started Kathak dance (a traditional North Indian dance) at the age of three. Professionally trained, Koyali has been teaching Kathak since moving to Vancouver to pursue a Masters degree with a focus on Planning and Evaluation of organizational programs and services. Although she was never planning to stay in Vancouver beyond her studies, she has lived here ever since.

Koyali also teaches dance as a form of therapy, referencing the healing properties of Indian classical dance on the mind, body and soul. Koyali brought up a fascinating anecdote of the therapeutic effects of Kathak on an aging guitar player with Parkinson’s who asked her for help at one of her workshops. The hand gestures in Kathak dance are known for their healing properties and therapeutic benefits. Upon learning these hand gestures from Koyali and practicing at home, the symptoms of this gentleman improved. 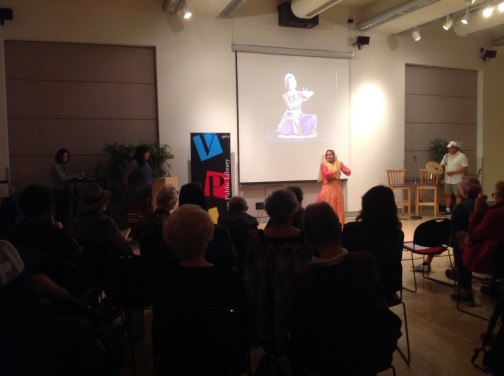 Her experience and connection to the arts through dance has made Koyali especially aware of its relevance in our daily lives. In addition to her own personal experience through Kathak, she also brought up the role of art in a community and how it fosters intercultural exchange. Both Koyali and Yoko place high importance on the exchange of culture, dialogue and ideas through art. “The concept of multiculturalism has changed to interculturalism,” Koyali said. “That’s what we are trying to embed within everything we are doing.” Multiculturalism embraces diversity and the fact that different cultures coexist.  Interculturalism takes this one step further, encouraging the exchange and interaction between otherwise separate entities. “Intercultural means it is open-ended, because the artist takes the risk to go beyond,” said Yoko. This interculturalism will be incorporated into the new Arts and Culture Council in the Collingwood Neighbourhood House. “The motivation to create comes from the artist, and to create you must have a creative hub.”

Within the framework of interculturalism, Koyali also mentioned her current efforts to bring together Indian and Indigenous culture, and how she plans on including this vision in the Arts and Culture Council. She expressed an intrigue and interest in Indigenous culture, which has existed since her arrival in Vancouver as a Masters student at the University of British Columbia. Particularly, exploring the commonalities between Indigenous culture and her own Indian background, in terms of their art, music, and even religious and cultural practices. She has already found many shared features across the two cultures. On May 27, Koyali organised the event “Coming Together” at Vancouver Central Library, which showcased the commonalities between Indigenous and East Indian classical cultures through dance, music and poetry. This was the first intercultural event of its kind in the province, and it revealed the extensive amount of possible similarities across cultures. “It was also an extraordinary learning experience,” she said. When we think about intercultural exchange, it is often thought of as an exchange between people – but Koyali’s experience reflects how this enlightening exchange also takes place within people. It was the journey that made the experience all the more rewarding.

“I have a very strong affinity with the arts community, and I try to help and contribute in different ways,” Koyali said, at the very beginning of our discussion. Her fascination with different cultures and interest in creating connections within the community is moving and incredibly inspiring to myself and the rest of the VACS team. Her focus on integrating an intercultural aspect in the different forms of art she pursues makes the entire experience inclusive and rewarding for all. We recognise that it is initiatives like hers that bring our community together and help us grow, both individually and as a collective.