Many years ago, in the middle of the night, a young boy was woken up by the feeling of his bed shaking. It was a trembling that only lasted minutes at most. It was the result of an earthquake that had rumbled beneath his hometown. The boy would grow up to be New Zealander seismic artist D.V. Rogers. Rogers, now 51, has many artistic credits to his name and has experienced many earthquakes as well as many countries including Australia, Malaysia, the United States, and London.

Roger’s projects usually take between 6 months and 3 years to complete. Still, he has amassed a large portfolio of collaborative and fine art projects. In spite of his ample experience with commercial art, Rogers emphasized the value of creating art that is personally relevant: “A lot about the work I do on a personal level; it’s [a] kind of freedom…in contemporary societies, doing my own artwork [is] something I always prefer. It’s priceless.” His personal projects include the Parkfield Interventional EQ Fieldwork (PIEQF) Table displayed in Parkfield California, Sound of Seismic (SOS) and DISASTR Hotel.

For Sound of Seismic, Rogers and his collaborator, Ryan McGee, made music from Earthquakes; specifically, the seismic waveform data. Waveform data looks a lot like pictographic representations of audio; however, it actually measures the depth, frequency, and energy release of seismic data. On the process, Rogers said, “To make seismic data audible, it needs to be sped up. We also experimented with some granular synthesis ideas which resulted in some seismic electronica being created.” Samples of the project were released on SoundCloud and generated positive reactions from the public.

Another project, DISASTR Hotel, was more performance-based and provocative. It displayed cost-effective temporary housing options that could be purchased directly after a disaster. “I wanted to publicly demonstrate the “Hexayurt” open hardware shelter system highlighting the need for community to recover together,” he continued, “In the event of a major earthquake, infrastructure support will be overloaded and society will not be able to rely on government to help out. We are in this together and we recover together.”

He created his first art project when he moved to California for college and discovered a medium that he would go on to use throughout his future career. “It was here I discovered performance art and the work of Robert Smithson and his site and non-site theory. The Internet was going mainstream and I inherited a readymade, hydraulic earthquake shake table from a failed museum and it was obvious at the time to interface this machine with real-time seismic data…” This led him to display his PIEQF shake table in Parkfield, California.

The table reacted to all seismic events over 0.1 magnitude and anyone walking over the sensors around the exhibit. This addition of sensors was especially engaging for the audience. “PIEQF was special and highlighted [that] anything is possible with applied effort and determination. For me, it was poetic and powerful, but seen and witnessed by very few.” He later mentioned, “Parkfield was not fully realized but it was pretty close. One regret I have was not leaving the machine in the ground and then excavating years later and re-animating.” His attempt to display the shake table to a larger audience in Los Angeles California, unfortunately, was also not realized due to a last-minute permit fee placed on the project.

He learned from the experience that in order to expand an art audience, “you really want to hit the streets and you don’t ask questions.” This is something that is rather difficult for a performance-based artist to do. He pointed out that graffiti artists have much more freedom and a much wider, easier to expand audience. They aren’t falling into the trap of “preaching to the choir.” 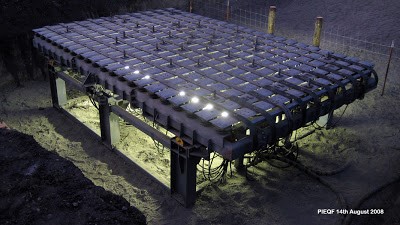 The easiest places for an artist to show their work are places where the artist already know the tips and are concerned, “I should make sure I have enough water for two weeks. I have enough non-perishable food for two weeks. Cause when that Cascadian subduction zone ruptures, inherently I’ll be on my own. I have to look after myself.” But many people don’t know these things. This is why it is crucial for artists to reach new audiences and spread their messages.

He explained that there is a gap between understanding what to do and actually doing it that needs to be addressed. “…They know they need to be prepared. And they’ll go ‘I must do that – I must have water and I must have a kit to keep me independent for two to three weeks after a major earthquake.’ But they don’t do it.” According to a study by FEMA, 60% percent of Americans aren’t prepared for their regional natural disasters and 80% percent are living in areas that have been affected by them.

Rogers also pointed out the impact time has on our assessment of risk: “The last major earthquake in Los Angeles was in the mid-1980s. That’s 30 years ago. So, what happens is, as time goes by, people, they get complacent and they forget… but you’ll find when that next major earthquake happens people in the next ten years afterwards will get prepared.” It’s this kind of cyclic behavior and thinking that permits disaster. “I think as an individual, it’s again about being conscious… It’s not a case of ‘it might happen.’ It’s gonna happen.”

He also wanted to encourage collaboration between people especially in Los Angeles: “One thing I would love to see is emergency management agencies engaging more with contemporary art-making to help get that message across for individuals to be mindful and conscious… Art-making is a very useful tool to explore that area of outreach.” The point of this is that if you change the minds of enough individuals you change the mind of a society.

“And the same thing will apply to Vancouver and Seattle because of the inherent nature of art. Making art requires a lot of resilience and tenacity and so you’ll find that artists will be the ones who actually recover really well.” When I asked him to explain this point, he said, “…most artists don’t have a lot of finance, but they find ways to make their art.” This is fairly standard in the art community. D.V. Rogers himself has worked as a steelworker on numerous film projects, including Mad Max Fury Road, Alien Covenant, and two Star Wars films, in order to fund his personal creative endeavors.

“It’s not a matter of ‘if,’ but a matter of ‘when’ that major event occurs, and artists will play a key role in recovery. Good artists are resilient and resilience is key to recovery.”